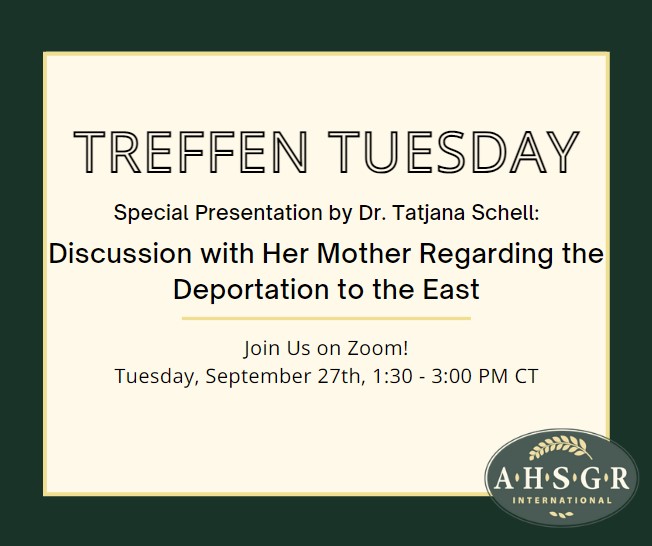 Born to a Volga German family, Katrin Schell, Tatjana’s mother, spent her early childhood in the 1950s-1960s in the region of Omsk in western Siberia where her parents and their respective families had been brought to following the deportation from their native village of Seewald on the Volga River. Growing up as the middle child of her family, she enjoyed the life in a tight-knit community of German families, where children played outside even in subzero temperatures, grandmothers ruled the household, and chores were plentiful and to be done in a timely manner.

In 1966, Katrin’s parents decided to move their family back to their Volga homeland, after spending 25 years living in Siberia. After graduating from college, she spent nearly twenty-five years working as a paramedic in the city of Volgograd. Following her family‘s move to Germany in the late 1990s, she was able to continue working in the medical field in the new country.

In their Treffen Tuesday presentation, Tatjana will ask Katrin about her time growing up in a small and tight-knit German community in Siberia and her adolescent years living in the village of Frank on the Volga.