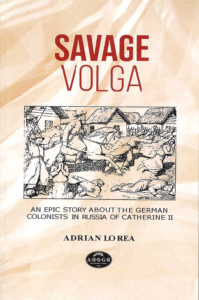 With permission of the author, AHSGR is offering a printed copy of Adrián Lorea’s book, Savage Volga. Purchase your copy through our online bookstore.

Russia, 1774. A decade after the colonization of the Lower Volga, the German villages endure the siege of the barbarians that lurk in the region, as well as the threat of the armies led by Yemelian Pugachev, the rebel Cossack who intends to dethrone the empress Catherine II.

In this turbulent setting, the village of Mariental is attacked by a group of Kyrgyz nomads, who kidnap, among other colonists, the young Katharina. Her brother Georg sets forth on her rescue along with a militia formed by inhabitants from different colonies. Meanwhile, Andrew, her other brother, joins Pugachev’s rebellion and takes part in the destructive campaign against the tsarist government.

This is the story of people who had been persecuted and a family who had been driven apart, a story of struggles, yearnings, of loves, and hopes.