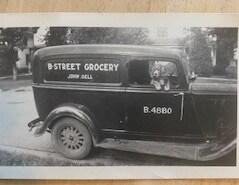 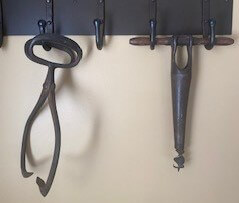 Jayne Cameron donated a pair of ice tongs and a bung hole auger to the museum’s general store. Her grandfather, John Dell, was the owner of B Street Grocery Store and used these tools.

His grocery store was located at 710 B Street in Lincoln (phone number B2505). He often advertised with other neighborhood groceries. According to newspaper reports, Dell’s store was robbed twice, once in 1921 and again in 1937. The second time, a 15-year-old boy got caught breaking into the store trying to take candy, cigarettes, and cigars, but John Dell caught him in the act and called the police.

John died July 2, 1965 and Mollie on March 5, 1983. Both were buried together at Wyuka Cemetery in Lincoln along with several of their children.

Cameron reminisced about her grandfather’s store during her childhood.

“I have wonderful childhood memories of walking to that store from my grandparents’ house on 8th and D, and then sitting on those store steps eating sunflower seeds and Little Debbie’s when we would come from North Carolina to visit our Lincoln family,” said Cameron.